Her hips jerked in anticipation; he hadn’t even touched her yet
Blindfolded, handcuffed to the bed; she was already soaking wet
She felt a dip in the mattress; he was making his way over to her
She held her breath; impatiently awaiting his first touch, his first words
Silence surrounded her, the deafening sound of …nothing
Then she heard him remove his shirt, his belt and the rest of his clothing.
She felt his hands at her knees; spreading her legs apart
Her walls convulsed, tightening; awaiting his first thrust
He spread her legs further. She clenched her hands into fist.
He wrapped his hands around her thighs, sliding her body closer to his.
She heard him inhale, the sound almost made her come.
He exhaled then asked her, “Are you ready for my tongue?”
She didn’t know how to respond, hell yes, sure, okay!
But instead she lifted her hips, bringing her wetness closer to his face.
He chuckled; she smiled, His tongue swiped against her flesh,
When it came to giving head, this man…he was the best.
She grinded against his mouth, the stubble of his goatee tickling her
He closed his lips around her tiny bud, his mouth devouring her.
Her body shook as waves of pleasure came crashing over her
But he didn’t stop, he didn’t let up, he just kept feasting on her
With her thighs shaking, her back arched, she felt her orgasm approaching
She shuddered and bit her lip, her body felt like it was floating.
He delved his tongue between her folds, in and out…in and out.
She tossed her head side to side trying her best not to scream out
But she failed; she trembled and screamed his name as she came
He swallowed the evidence of her orgasm, her body felt drained
He released her legs and rubbed his hands over her stomach, up to her breast
She felt him removing the blindfold and handcuffs, his chest pressed against her chest
“I told you I could make you scream,” is what he whispered in her ear.
Yes he had and yes he did. But this night was far from over.
It was her turn to show him, that this was no rookie that he wed.
She pushed him down against the mattress, “Now watch me make you beg.” 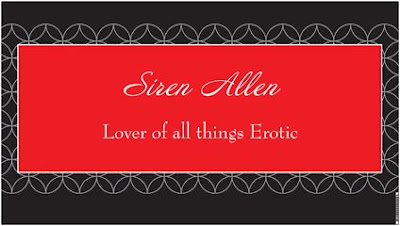 Siren Allen is a Clinical Laboratory Technician but her first passion is writing. When she’s not working in the Lab or writing steamy stories she’s planning her wedding to her best friend and future hubby Duane Allen.

Her first book is scheduled to be released this fall!