Another Sexy Sunday and this week I have the pleasure of introducing you to the divine Ms. Elodie Parkes. She went and did all the hard work for me, so sit back, get comfy and enjoy some snippets and a little bit about her. Please feel free to leave comments for her below, too.

Thanks for stopping by, Elodie!

Hi Deliza, It’s lovely to visit with you,

A little about me for your readers.

I live in Canterbury, United Kingdom, and I work in an antiques shop, and write. I have two dogs that keep me fit with their need for walks. They are Dalmatian dogs, Celt and Chaucer’ who big softies.

I never consciously thought I wanted to be a writer. I just knew I had things to write and have always written things, even if it has just been left on my computer for years.

I started writing when I was seventeen. Life intervened in my writing time and I stopped serious writing for some time. I started writing again seriously a couple of years ago, because I had so many stories in my head.

Millie Reinvented, which is a book for women, a love story, an uplifting story for the lonely, there’s a little humor in it and lots of yummy sex.

The Horoscope Writer, A deeply romantic, sexy romance, full of delicious sex, that shows the lovely character of the main male lead, Dominic. He’s my ‘wish he was real guy’, touch of paranormal in this.

Find the books on:

There’s a special place in my heart for my male lead August in Millie Reinvented. Even though I wrote it, when I re-read, I always love the way he is so constant in his love and care for Millie. 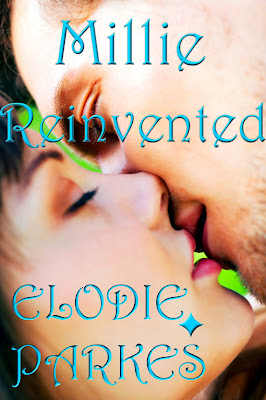 Here is the blurb:

When August kissed Millie at a Christmas party, he was perhaps already half in love with her. Millie suddenly realizes that her husband has not really been kissing her for a couple of years. The kiss from August is so different and enjoyable it jolts her into the realization that she has been kissing her husband but he’s just been taking it.

It’s not the only thing he’s been taking.

Millie finds herself assessing her relationship with her husband over the next months as the August starts to pursue her. The things Millie finds out about her husband astonish her.

What will happen as Millie and August develop a steamy and special relationship?

August was in a meeting and his desk remained empty for the fifteen minutes Millie allowed herself wandering around his department.

She left that floor and went to check if he was making coffee.

It was right then that August had finished his meeting and under the cover of an Imperial sized, artwork portfolio, he took the candy box and dropped it on Millie’s desk. It had been easier than he thought it would be to do that, and now he was on his way back to his office via the stairs. He heard footsteps and then he came face to face with Millie.

She stared at him for a few seconds before she threw herself at him and kissed him. She held his head to hers, and he turned her and pressed her against the wall shielding her with his body. Millie moved her hands from his face to his chest and then his stomach. She kissed him and felt his kiss hungry and searching against her lips, and then her tongue. Her hands strayed down to the zip fastening of his suit pants. They were cut low so that they rested on his hips and Millie found the fastening, undid it, and unzipped them a little. She put her fingers into the top of the trousers and then his boxers. She could feel him hard and yet like velvet, and she caught her breath.

August was totally captivated by this. He felt himself harden and thicken at her touch, and deepened his kiss. He was finding it hard to breathe and stopped kissing Millie to close his eyes against her neck, his head on her shoulder.

“Millie, Millie”, he whispered, and she slid her hand further into his shorts as she licked his earlobe.

“August you feel so good.”

He dropped the portfolio he was carrying to the floor. He pulled himself together and gently moved her hand. He fastened his trousers, and ran a hand through his glossy hair. His blue eyes were dark with desire, and he took her hands in his and held them to his chest.

“Millie I’m not strong enough to resist you any longer. I’m desperate for you and I think of nothing but you. Meet me after work in the car park. I will be finished at six, is that okay?”

Millie smiled. “It is and I’ll be watching the clock until then.”

August kissed her, his lips a soft caress, and then a lingering pressure as he found all he wanted to do was stay with her, kiss her, and feel her hands on him.

They went to their respective offices and August was glad he knew where the security cameras were, and they were not on that stairwell. He got to his desk and could hardly sit down he was so hard. His erection pressed up against the low waistband of his suit pants.

Millie got to her desk and sat down. She felt damp and stood up to pull the skirt of her business suit down further, worried she might leave some kind of telltale dampness on her chair. August was going to drive her nuts she thought and maximized her email window to read anything new.

I do love to write.

People and emotions inspire me to write. The complexity of life spurs me to write. I see emotions in people around me all the time, and often they remain unspoken. I think we don’t share ourselves enough, and are encouraged to hide our true selves.

Lots of my characters have some foundation from real people who have passed through my life. They are composites of those glimpses of people and my imagination.

I don’t have family and amongst my friends, no one knows what I write. Just one friend knows I write something (smiles). I seriously doubt anyone I actually know has read any of my books. That’s okay.

My female lead characters are intelligent and strong, yet have hidden vulnerabilities, or life happenings that are harsh. They know what it is like to be lonely and they are not afraid to go after love if it presents itself.

My male lead characters are deep, gentle, sexy, sometimes afraid of their feelings, sometimes so desperately in love they lay themselves open. They are intelligent and giving. The male leads in my stories with paranormal themes are different. They can be alphas, mysterious, and have strange things in their lives, but they will love their woman forever if they fall in love.

I’ve also brought along The Last Time today, which is my newest release. 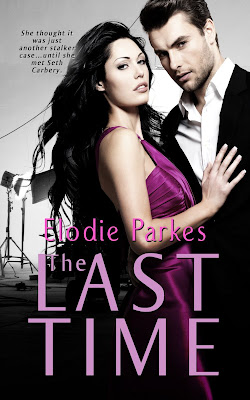 Actor Seth Carbery swears he will never fall in love again, that is until he meets private detective Bethany Snow.

Something strange is going on. Seth and other members of the movie cast and crew are receiving threatening letters, but no threat has ever been carried out... yet. Bethany Snow is sent on location by the Black Agency to investigate, and guard Seth Carbery against danger.

The case is not what it first seems and even when Bethany thinks it could be over, a new twist means she becomes a target.

Seth and Bethany find they can’t keep their hands off each other.

Who is sending the letters and why? Does Seth have a secret admirer or stalker?

Bethany put her arms up around his neck, and pressed closely along his body. Seth kissed her softly, gently holding her face, his fingers reaching her ear, and sending little waves of sensation down her neck. Bethany opened her mouth a little inviting his tongue with the tip of her own. She moved her arms to hold him around the hips and pull him to hers. He had an erection. She could feel it hard and enticing against her.

Seth began to stroke her nipples through the thin cotton of her crop top. Bethany sighed into his mouth, and traced her fingertips up and down his back, and then unable to help herself, she put a hand into his shorts and held him, his hardness making her give a little throaty sound of need.

Seth’s kiss was overwhelming and Bethany felt melted from the inside out. He thrust slightly into her hand. A little pearl of moisture escaped from his erection. Bethany felt it and smoothed her fingertips over it bringing her other hand to pull his shorts down so that she could hold him properly.

She loved to hold a man like that, one hand curled around his erection, the other stroking him underneath so that he would gasp, and thrust. She liked to have him in her mouth too, but right now Seth’s kisses were intoxicating, and she couldn’t bear the thought of his mouth not being on hers.

Seth moaned a little and took hold of Bethany’s shorts dragging them halfway down her thighs in one move. He was still kissing her hungrily and thrusting his own hips gently.