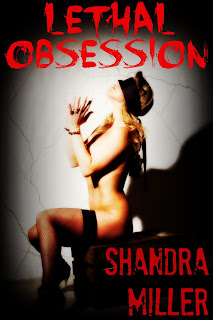 Synopsis:
Angela Martin is chief detective for the Moose Creek, N.C., police department, when a possible murder call comes in. At the scene she finds the body of a woman, hanging from hands bound overhead, eyes blindfolded, mouth gagged. Red whip marks crisscross the woman’s buttocks, the back of her legs. She recognizes the scene, knows exactly what happened to the woman before she died, because Det. Angela Martin was bound and blindfolded, gagged and whipped exactly as this woman had been. By a man she met on line.
A killer.
A master whose power over her is so strong she’s willing to risk everything – her career, even her life – to be with him again.
LETHAL OBSESSION is a novel of desire and domination, suspicion and fear, and the mysterious way those emotions mingle into an inescapable pull, one that might cost Angela her life.
My Thoughts:
As I make pretty clear on my review submission page, I’m rather picky about what kind of erotic writing I’ll read. I tend to be a little prudish, for lack of a better word (yes, I see the irony), about it because I don’t really go for the whole BDSM thing (much of the reason I can’t seem to make myself read more than one chapter of Fifty Shades of Grey so far - well...plus it bored me

).That said, I did know what I was getting into when I decided to participate in Shandra Miller’s blog tour and review her new novel, which does contain BDSM, and therefore prepared myself accordingly to review based on the quality of the writing, period. Now,  I always try to do that anyway, cuz I feel that's what a good and fair reviewer does. Just because I don't care for scifi (for example) doesn't mean I'm gonna give a scifi book a crappy review if it's still well-written...ya feelin' me? Therefore...
I was pleasantly surprised with this book. Unlike some erotic material I’ve read, Ms. Miller is a stylish writer and her work felt like any other book I may have purchased by a big publishing house in a brick and mortar bookstore - the quality totally holds up in comparison. Her lead character is nicely developed and even in instances when Angela herself didn’t understand her own motivations, the author allows us to experience that internal battle along with her as she navigates her questionable decisions. We get to invest in her instead of just taking on the roles of disconnected voyeurs. And trust, Angela makes many a WTF decision in this book! More than once I found myself yelling at my Kindle (app), “What are you doing, you crazy bitch?! You’re gonna get yourself killed! Brutally!!!”

But I never got the impression that Angela was unintelligent or weak (a major pet peeve for me for female characters in any genre); rather she seemed to be at a major crossroads in her life and having been rejected for so long by her husband, was desperate to feel wanted and alive again. Her flirtation with serious danger also (obviously) contributed to the suspense. While I am a slow reader because of the bazillion commitments I have going on, I still found myself trying to sneak in 20 minutes here and there to find out what happens next whenever I could.
The erotic pieces of the book fit in nicely with what was actually happening in the story and not a single sex scene felt gratuitous, which I personally found refreshing (let’s face it, erotica isn’t exactly known for its tastefulness as a general rule

). I also give the author extra kudos for never going excessively blue with the language, proving that erotica can be hot without being trashy (I admittedly fail at this miserably – although I’m not exactly trying, either

). Miller does a superb job of making the powerful draw of the BDSM lifestyle an understandable one on an emotional level as opposed to merely creating a string of sexual scenarios that lack motivation. There's plenty of deviant steam here, but there is also an interesting, compelling story. And that is shizzle I can appreciate.
My only minor complaints with this book are a) that big ole miserable cliff hanger at the end (boooooo! I have to know NOW!), b) I’m a freak for back story so I wouldn’t have minded learning more about Angela as a person - her past, her prior relationship with her husband, etc., (I feel there was room for it, as it seemed like a pretty quick read) and c) Shandra’s writing style is so zen that on occasion I would have liked a touch more angst sprinkled in here and there (to be fair, I watch a ton of crime dramas and paranormal shows and I'm pretty hard to freak out at this point

). The book overall percolates nicely with suspense from page one, has well written characters and scenes and keeps you just enough on the edge of your seat without crossing so far into icky-ville that you feel violated for having read it. If you enjoy a good thriller and you’re also considering dipping your toe into erotica for the first time, this is a great book for you. I highly recommend it and look forward to the sequel. Cuz SERIOUSLY with that damned cliffhanger, woman!

A dark and steamy but still classy read.
Four and a half out of five smooches!

Meet The Author:
Shandra is a mid-western gal who left home at 16 and never looked back. Eventually she made her way to Florida, worked for three years as a carnie and another three with a circus -- yes, a real, live, honest-to-god circus. Traveled all through the South and Mid-Atlantic, town to town, on the road eight months at a time.
Now she’s a small-town office girl, filing papers, answering the phone. She doesn’t own a cell phone or a TV, she takes long walks at night, lies in the grass in the day time and watches the clouds go by, and she writes erotica. Blazing hot erotica. And mystery stories dripping with lust, sex and suspense. 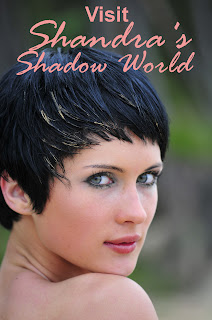 Follow Shandra:
Twitter
Facebook Fan Page
Follow the Lethal Obsession Blog Tour
There you’ll find contests and giveaways,
a chance at winning a $20 Amazon gift card
and an e-copy of all of her published fiction!
Posted by Unknown at 4:30 AM