This Sexy Sunday I'm happy to welcome C.A. Szarek to Deliza's Dirty Dramas for the first time! Below is an excerpt of her latest novel Collision Force (Book One in the Crossing Forces series), a giveaway AND a link to download her FREE Christmas book featuring the stars of Collision Force, A Cole In Her Stocking. Check it out!

Thank you for visiting! Please feel free to leave a comment and subscribe if you haven't already! (over here →) 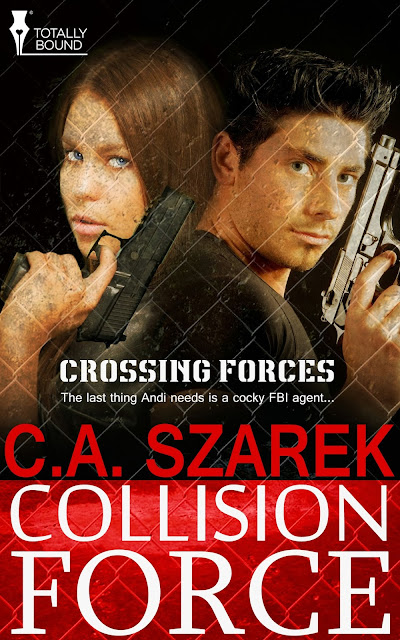 Book One in the Crossing Forces Series

Bad boy, married to his job FBI agent Cole Lucas always gets his man. So when the unthinkable happens and one gets away, Cole grits his teeth and hunts human trafficker Carlo Maldonado all the way to Antioch, Texas, where he collides with Detective Andi MacLaren.

Cole doesn’t do small towns and doesn’t get involved with women he works with, but Andi tempts him in ways he doesn’t want to acknowledge.

Two murders, her partner shot and leading the investigation on her own, the last thing Andi needs is a cocky FBI agent who sees her as no more than a tagalong.

Widow and single mother Andi is used to being on her own. When Cole gets stuck without a place to stay, crashing on her couch puts them in dangerous territory.

Attraction and passion bring Andi to a place she’d left behind when her husband died. Her three-year-old son quickly wiggles his way into Cole’s heart, and he starts contemplating things—family, love—that he’d never planned for himself.

Can being forced to work together make them stronger or will their differences jeopardise their case and their hearts? 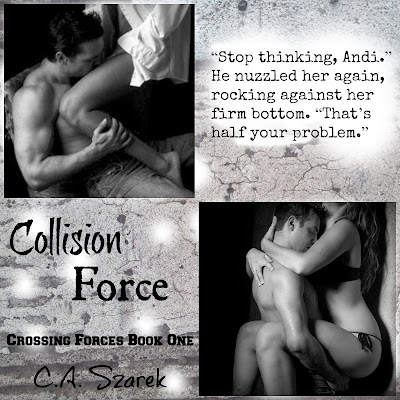 She was at the sink scrubbing her electric skillet. Cole pressed a kiss to the back of her neck, then nuzzled the hollow of her ear, nipping her earlobe. He watched the shiver travel down her spine and slipped a hand around her waist, settling it low on her stomach. He pulled her bottom against him.

His cock shot from six o’clock to midnight in two seconds flat.

“I thought he would never leave,” he whispered against the baby hairs at the back of her neck. Her ponytail brushed his cheek.

“Stop thinking, Andi.” He nuzzled her again, rocking against her firm bottom. “That’s half your problem.”

Cole whirled her around and covered her mouth with his. She yelped, but he smothered it with his tongue, exploring her sweetness. Kissing him back, she moaned after only a moment, shooting her arms around him.

He pulled back, staring into her half-lidded sapphire eyes. Warm, probably soapy water sank into the fabric of his pale blue button-down shirt—the only non-tee with him in Texas.

“You got me wet,” Cole said, his lips hovering over hers.

Andi bit her bottom lip, but she couldn’t hold back her giggle. “You grabbed me. It wasn’t my fault.”

After pressing a quick kiss into her lips, he took a step back. “Then I guess I just have to take it off.”

“You won’t need it,” she whispered. Her tongue shot out to moisten her kiss-swollen lips, and Cole bit back a groan.

She reached for a dish towel and dried her damp hands. After tossing it back on the counter, she stepped towards him, leaning up and touching her lips to his while her deft fingers worked his buttons.

He took control, cupping the back of her head to bring her closer. She whimpered, but he deepened the kiss.

Andi pulled away, face already flushed pink. “You’re distracting me from getting you naked.”

He laughed, caressing her cheek with his thumb, tracing the freckles along the bridge of her nose. Thank God she quit thinking.

“By all means, continue. We can’t have that.”

She flashed a smile that made his heart thud and his cock throb. When she got his shirt open, Andi placed both palms flat to the hard planes of his chest. She stroked him, following his defined lines. Cole gasped. Her touch made his blood boil.

GIVEAWAY!!!
Enter to win an ecopy of Collision Force by C.A. Szarek
and ecopies of 'The Savannah Rossi Chronicles' Vol. 1-4 by Deliza Rafferty!

Download an ecopy of C.A. Szarek's Christmas story,
Cole In Her Stocking,
featuring Andi and Cole from Collision Force! 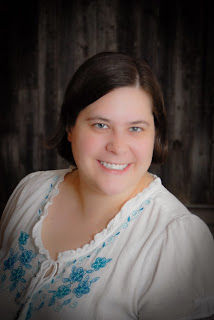 C.A. Szarek is originally from Ohio, but got to Texas as soon as she could. She is married and has a bachelor's degree in Criminal Justice.

She works with kids when she’s not writing.

She’s always wanted to be a writer and is overjoyed to share her stories with the world.