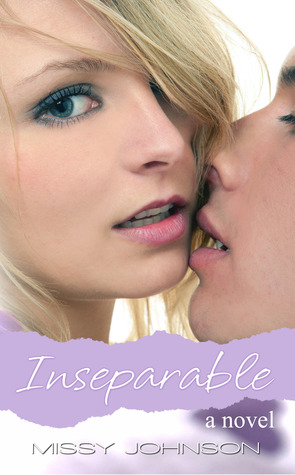 Today is the first day of Missy Johnson's Inseparable blog tour - how excited am I to get to kick things off??? Unforch I didn't have time to review, but I have a couple excerpts - some humor and some hotness - AND a giveaway for you! So take a gander and as always, feel free to leave comments below.

Thanks for letting me host, Missy! ♥

Nineteen year old Lily is still struggling with the death of her identical twin, Abby, a year earlier when she moves away from home for college.


Following Abby’s death, Lily spent time in a psych facility after she was still seeing, hearing and speaking to Abby as though she was still alive. Now, ready to begin college, Abby only shows up in her dreams.


A chance encounter with Dane Hansen changes Lily’s life. Lily’s friends warn her off becoming involved with Dane. He’s bad news, according to the rumors, anyway..

Now, he’s back, nearly a year after he disappeared off the face of the earth weeks into his freshman year at college. But Dane is far from the popular, womanizing, athlete he once was.

Dane has experienced loss himself, after his six year old sister was abducted and murdered nearly ten years ago. He understands Lily, and the more time he spends with her, the harder he falls.

There is something he hasn’t told her though, something almost nobody knows, and it’s something that might stop Lily from feeling the same way.

“Dane Hansen?” She repeated, her voice far above the whisper I would have appreciated. Several students surrounding us stopped their conversations to stare at Gem. Her eyes grew wide.
“I’m so sorry,” She gasped, clapping her hand over her mouth, as she realized just how well her voice had carried through the hall. My face flamed as I stared straight ahead, too terrified to look around.
Surely her voice wouldn’t have carried that far, would it? There were a lot of rows between Dane and us. Slowly, I turned my head in his direction, convinced that he wouldn’t have heard her, but for some stupid reason I needed to check. What I wasn’t prepared for was to see his eyes firmly on me. Our eyes met and he grinned.
Shit. I quickly turned back around to continue my minor breakdown.

His hand ran up my bare leg, lifting my thigh up onto his hip. I gasped as I felt his erection push flush up against my entrance, separated only by his pants and the thin fabric of my panties. His finger toyed with the lace edging, teasing me with his touch, his fingers threatening to dip inside me.
“I better go,” I whispered with all my resolve, when all I really wanted to do was spend the next six hours letting him explore my body. However, I also knew that if I didn’t take things slow, I would regret it. What I was feeling for Dane ran so much deeper than physical lust; the last thing I wanted was to rush into a sexual relationship too early.
“If you have to,” He mumbled, his hands caressing my face, with no intention of letting go. I kissed him again and smiled. He wasn’t making this easy.
“I do have to,” I replied, raising an eyebrow, “I had a great time tonight,” I added, meeting his gaze, my eyes reflecting the happiness in his. Kissing him again, I pulled away, knowing if I didn’t leave right this moment, I wouldn’t be able to leave at all.

Missy lives in a small town in Central Victoria with her husband, and her confused pets (a dog who think she's a cat, a cat who thinks he's a dog...you get the picture).

When she's not writing, she can usually be found looking for something to read.